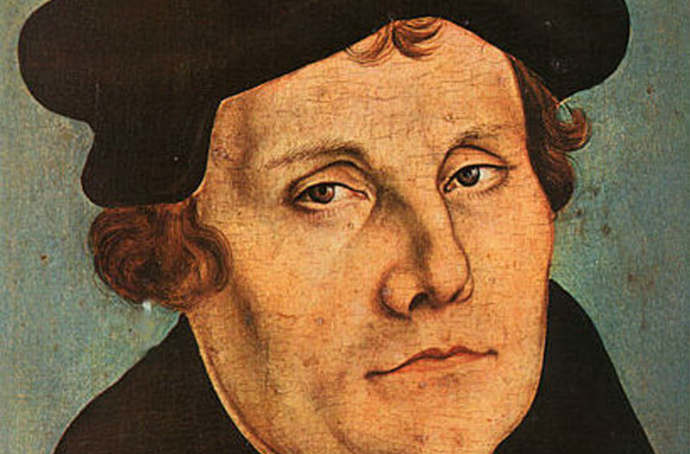 Although Martin Luther (1483-1546) entered the world during the Renaissance, his early years in Mansfeld, Germany showed little evidence of cultural rebirth. Plagues, thieves, and a folk culture rife with sinister spirits meant that many lived in a constant fear of death. European society of this era commonly blended paganism with Christian tradition, creating a fantastically dark Christianity mingled with superstition. In Germany the blowing wind, flowing streams, and tall trees of the forest were thought to be animated by malevolent beings such as elves, fairies, witches and mermaids. In such an unstable world, spiritual security was a far-fetched dream which eluded many pious Christians. The dream was sometimes artistically portrayed by the Lord Jesus seated on his throne with a lily protruding from one side of his head (symbolizing resurrection) and on the other a sword (representing judgment). Children wondered, “How do I obtain the lily instead of the sword?”

Historian Martin Marty describes the religious passion of Martin Luther by saying, “He makes most sense as a wrestler with God, indeed, as a God-obsessed seeker of certainty and assurance in a time of social trauma and of personal anxiety, beginning with his own.”[1] The question of how to please the divine judge burned in his soul. Here Luther candidly describes his experience:

I greatly longed to understand Paul’s Epistle to the Romans and nothing stood in the way but that one expression, “the justice whereby God is just and deals justly in punishing the unjust.” My situation was that, although an impeccable monk, I stood before God as a sinner troubled in conscience, and I had no confidence that my merit would assuage him.

Night and day I pondered until I saw the connection between the justice of God and the statement that “the just shall live by his faith.” Then I grasped that the justice of God is that righteousness by which through grace and sheer mercy God justifies us through faith. Thereupon I felt myself to be reborn and to have gone through open doors into paradise. The whole of Scripture took on a new meaning, and whereas before the “justice of God” had filled me with hate, now it became to me inexpressibly sweet in greater love. This passage of Paul became to me a gate to heaven…

If you have a true faith that Christ is your Savior, then at once you have a gracious God, for faith leads you in and opens up God’s heart and will, that you should see pure grace and overflowing love.[2]

Luther’s experience is in many ways a prototype for subsequent conversions. Although today’s post-enlightened, tech savvy world appears to have advanced light-years beyond the 16th Century, the same questions about authority and salvation continue to be asked. In light of these questions, and in view of the 500-year commemoration of Luther’s protest, I am teaching a class titled Luther’s Reformation, which will consider how gospel renewal applies to the contemporary moment in which we live.

Join us on Sunday Mornings @ 9:15am September 11 through October 30 at New Covenant Church in Naperville. We are located at 1 Bunting Lane, Naperville, IL 60565.