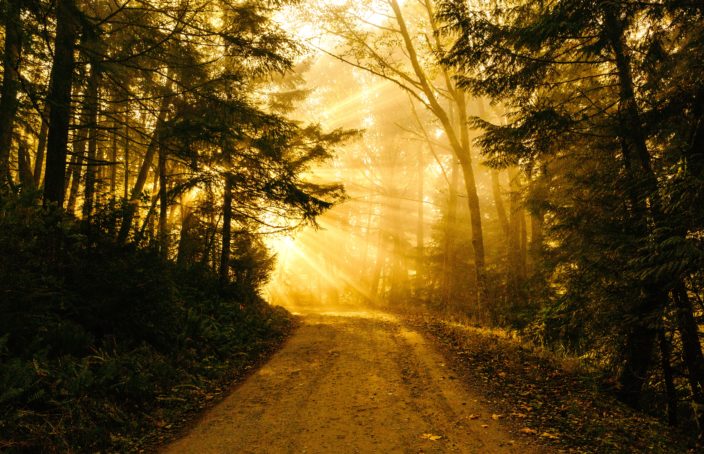 It started one morning. Upon reaching my office in Manhattan, the phone rang. It was my grandfather. In a serious tone, he spoke a brief message: “It’s your Dad; come home.” Somehow I knew not to ask questions. It turned out to be a severe heart attack. The waterline of anxiety quickly rose above my head.

After days of sitting beside Dad’s hospital bed, I left my job at New York Telephone to manage the family business. It was a mid-size printing company with a dozen employees. With a deepening level of stress, Mom’s emotions crashed, and I started having panic attacks. Into this dark valley appeared a new employee named Jan. I soon learned that she was a Christian.

One day, while hanging up the phone with the cardiologist, I noticed a handwritten index card on my desk displaying Psalm 1:3:

The one who delights in the Law of the Lord is like a tree planted by streams of water that yields its fruit in its season, and its leaf does not wither. In all that he does, he prospers.

It was from Jan. Each day she selected a Bible verse for me. I normally would have dismissed her notes as religious propaganda from a flaky employee; but now, after weeks of despair, I was attentive and collected them in my desk. Eventually, the day came when Jan invited me to her church. Free to choose, and naturally disposed to decline, I listened to the words proceed from my mouth in response to her invitation. I, more than anyone, was surprised by what I heard. “Yes.”

I knew nothing about Protestantism and, quite frankly, I didn’t care to. Protestants, in my view, were an imitation of the one true Church. As I had told Jan when she first mentioned the idea of visiting her midweek service, “If you own a set of Big Bertha golf clubs, why be concerned with imitation knockoffs?” But now, on account of my Dad’s heart attack and the myriad challenges that it provoked, my stress had grown to unmanageable proportions.

The parking lot of Faith Evangelical Church was packed. In amazement I looked around thinking, “It’s a Wednesday night; these people must get a life!” With a mixture of humiliation and curiosity I entered the building and sat in the rear pew of their “worship center.” Devoid of any wood carvings, arched windows, or stained glass, it was simply a large room with a stage. Worse than austere, it was ugly.

Occasionally, I looked through my peripheral vision at Jan. Her eyes remained closed as she sang. Oh, and did we sing! After forty minutes of choruses that seemed familiar to everyone but me, the senior pastor finally entered the pulpit. With a style combining Al Pacino and a young Billy Graham, he quoted John 15:5-6:

I am the vine; you are the branches. If a man remains in me and I in him, he will bear much fruit; apart from me you can do nothing. If anyone does not remain in me, he is like a branch that is thrown away and withers; such branches are picked up, thrown into the fire and burned (NIV).

Humanity attempts to produce its own fruit. We run around exploring this and that religion, this and that philosophy, and by the end of the day, when we lay our heads down upon our pillows, our souls are still empty.

The Bible says in Psalm 121, “I lift up my eyes to the hills. From where does my help come? My help comes from the LORD, who made heaven and earth.” And what do we find when we look up to the Lord? The Lord Jesus says, “Come to me, all who labor and are heavy laden, and I will give you rest.”

In what are you resting? In what does your life find meaning and purpose? What will be there for you the second after you take your last breath and depart in death? Consider the Good News! Jesus the Messiah died for our sins, rose from the dead, reigns in eternal glory, and at this moment is calling you to repent and embrace him.

Everyone on earth faces the same fundamental choice. Will we continue to live independent of Christ, in restlessness of soul, eventually to be gathered like a useless branch into a pile to be burned? Or will we submit to his authority and abide in his peace? The former person dies in a never ending state of alienation; the latter enjoys God’s acceptance now and for eternity. What will it be?

I don’t know how to properly describe what came next. Anticipation surged through my veins and my mind swirled with questions. Then, suddenly, the eyes of my soul opened. They immediately blinked, again, and again, as though they were awoken from sleep by a flash of light. The object of my vision appeared so new and bright that my initial response was to retreat.

As my inner eyes tried to adjust, I sensed an imposing presence. I didn’t see the angelic host or hear them singing. Instead, I felt divine mercy closing in on me. After a moment, this mercy, now accompanied by grace, reached out to grasp my guilt and shame—previously reasons for hopelessness—and it brought to mind three simple words: “It is finished.”

In that moment I finally understood the meaning of Jesus’ cross and resurrection. My search for hope had ended. The Lamb of God had died in my place, not simply as an offering for “sin,” in a general sense, but for me personally. Not Christ accruing superabundant merits to be stored in a heavenly treasury and dispensed to me as I participated in sacramental rites, but the complete satisfaction of God’s wrath and forgiveness of my sins.

The joy of redemption became a reality. At once, I identified with the penitent thief on the cross who encountered the Lord’s promise, “Today you will be with me in paradise” (Luke 23:43), the adopted orphan-turned-son (John 1:12-13), and the rescued rebel delivered from the domain of darkness (Col. 1:13). Why such a dramatic change? In Jesus’ words: “I tell you the truth, whoever hears my word and believes him who sent me has eternal life and will not be condemned; he has crossed over from death to life” (John 5:24).

Similar to converts like Augustine, Pascal, Luther, Newton, and a host of others throughout history, I encountered God in such a profound way that my life was permanently changed. To this day, I don’t have a better way to describe it than with the words of Charles Wesley in his famous hymn “And Can It Be That I Should Gain”:

Thine eye diffused a quickening ray, I woke, the dungeon flamed with light;

My chains fell off, my heart was free; I rose, went forth and followed Thee.

In retrospect, I believe this was the day I began to follow Christ.