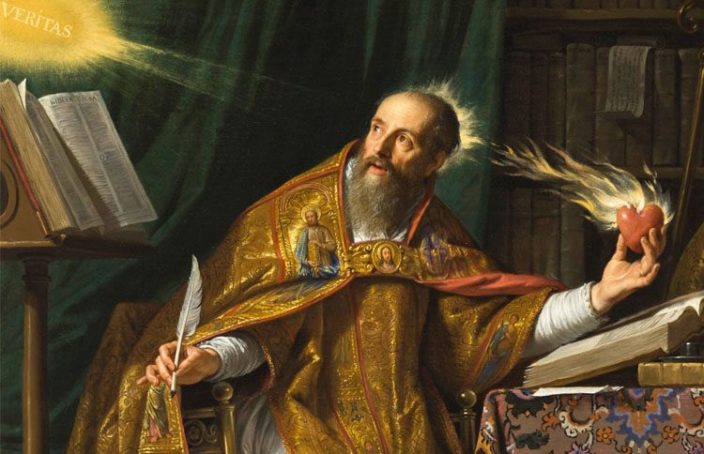 The most significant patristic source of the Protestant Reformation was Augustine of Hippo. In centuries preceding the sixteenth, interest in Augustine had flowered, spawning a widespread attraction to his theology and the order(s) that bore his name. It’s no accident that Martin Luther was an Augustinian, as was Peter Martyr Vermigli. Moreover, we find in John Calvin’s writing, particularly his Institutes, a steady stream of citations from the old Bishop.

It is interesting to see Catholics and Protestants sometimes argue about which tradition has a greater claim to Augustine’s legacy. This is especially true regarding the doctrine of justification, where he is a bright-shining luminary (or “fountainhead” as McGrath puts it) on both sides of the ecclesial divide. In what follows, we won’t tackle that debate, but rather try to summarize Augustine’s teaching on justification in the interest of clarifying the central impulse of his thought. Such knowledge promises to enrich our discussions with Catholic friends and loved ones on the subject of salvation.

Augustine’s Doctrine of Justification in a (Small) Nutshell

Perhaps the most important concept to clarify concerning Augustine’s doctrine is that justification is a matter of being made righteous. With limited facility in and recourse to the Hebrew and Greek language, he took the Latin iustificari as meaning “to make righteous.” This approach distinguishes Augustine from the Protestant Reformers, who understood justification to describe God’s activity of attributing or imputing righteousness to the sinner as the ground of acceptance.

Over and against the teaching of Pelagius, who argued that God offers grace to those who are worthy of it, Augustine insisted that justification is never secured by the autonomous merit of man. The notion that God imparts grace according to human works, he argued, denigrates justification as something owed—a debt—and therefore falls short of grace. Instead, human merit is regarded as a grace from God: “When God crowns our merits,” Augustine famously declared, “he crowns his own gifts.”[2] Protestants celebrate Augustine’s championing of grace against Pelagius, but we dissent from the idea that eternal life can be merited by human works (outside the finished work of Christ).

The process of justification begins with baptism, the event in which sin is forgiven. From there, righteousness proceeds to grow in the life of a believer. Because it unfolds gradually (in the process of being made righteous) justification spans the length of one’s life. Here is how Augustine conveys the outworking of such righteousness:

It follows, as I see it, that in whatever kind of degree we may define righteousness in this life, there is in this life no man entirely without sin: there is need for every man to give that it may be given to him, to forgive that it may be forgiven him, and in respect of any righteousness he possesses not to presume that it has come of his own making, but to accept it as the grace of God who justifies; yet none the less to hunger and thirst for the gift of righteousness from him who is the living bread and with whom is the well of life—who so works justification in his saints that labor in the trial of this life….[3]

In Augustine’s doctrine, it is the Spirit’s enabling grace that empowers one in the growth of justification. Such righteousness is not accessed by faith alone; rather, it is by faith and love. Bear in mind that for Augustine “faith” describes the act of believing the gospel on the basis of the authority of the apostolic message. To be complete, such faith must be accompanied by love (particularly of God and of one’s neighbor). Again, as Augustine put it: “The man in whom is the faith that works through love (Gal 5) begins to delight in the law of God after the inward man; and that delight is a gift not of the letter but of the Spirit.”[4]

A Central Impulse and Significance of Augustine’s Doctrine

A central emphasis of Augustine’s doctrine of justification is the believer’s ethically engaged participation in the life of Christ, a participation empowered by the Spirit that grows and manifests itself in greater levels of love. In Alister McGrath’s words, “For Augustine, it is love, rather than faith, which is the power that brings about the conversion of people.”[5] If I were to express this Augustinian impulse in terms that I hear from Catholic friends, it would be something like this: God, by his Spirit and according to his grace, fortifies the souls of believers with righteousness so they will increasingly embody the love of Christ and merit eternal life.

How then should Protestants think about Augustine’s doctrine, especially in conversation with Catholic friends? In what follows, I’d like to offer some thoughts.

Given the Catholic understanding of justification—that it is a process in which one becomes increasingly righteous—the assertion that God accepts us by “faith alone” often sounds like “cheap grace”(to borrow a phrase from Dietrich Bonhoeffer). It sounds like we’re saying, “Don’t worry about pursuing a life of holiness. Just say this sinner’s prayer, walk this aisle, and then you’ll be safe for all of eternity.” Thus, for Catholics, standing on the shoulders of Augustine, our doctrine of justification may appear to be a form of fire insurance that requires a minimal investment in exchange for an eternal payoff.

Our opportunity among Catholic friends is to explain what we mean by “faith alone,” that humanity is incapable of meriting the smallest amount of divine favor by performing acts of love, and that God therefore gives the gift of Christ’s righteousness as the basis of our acceptance, a gift that comes only through faith. But this should not denigrate the importance of tangible love in the larger outworking of salvation. As the Reformers put it, justification is by faith alone, but not by a faith that remains alone.[6] Or as John Calvin stated, “For we dream neither of a faith devoid of good works nor of a justification that stands without them.”[7] The same emphasis continued among subsequent evangelicals, as Jonathan Edwards wrote, “And one great thing he [Jesus] aimed at in redemption, was to deliver them from their idols, and bring them to God.”[8]

Relating Faith to Acts of Love

An old professor of mine liked to explain the need for tangible acts of love in salvation in terms of a “Costco Card.” Most parts of the country probably have a Costco or equivalent. It is a membership warehouse chain where customers enjoy discounts on a wide array of products because merchandise is purchased in bulk. The decisive transaction that provides access to Costco occurs when one becomes a member. You simply pay the fee, get your membership card with embarrassing photo, and shop to your heart’s desire. Whenever you visit the store, you must present your card to the nice lady at the door to verify that you have paid the requisite price of membership. This card-showing exercise, which is performed in all subsequent visits, simply confirms that you have already completed the membership transaction.[9]

So it is with works of love in salvation. Our virtuous behavior can never procure or somehow enhance God’s favor toward us. The cost of forgiveness and new life is infinite and we are utterly bankrupt. Only Christ can complete the transaction for us, which he did by shedding his blood. By dying on the cross as our substitute, and rising from the dead, Jesus enabled us to approach the throne of grace with confidence. But not only do we have confidence, God has also sent his Holy Spirit to live within us and has blessed us with every spiritual blessing in heaven in order for the Church to walk in good works which he prepared beforehand. Therefore, while we maintain that justification is by faith alone, we must regard salvation to be much more than a sinner’s prayer that gets us into heaven. God’s unmerited favor must take the form of an obedient life of faith here and now, as Paul the Apostle writes: “Since we have these promises, dear friends, let us purify ourselves from everything that contaminates body and spirit, perfecting holiness out of reverence for God” (2 Cor 7:1). This Pauline notion is also deeply Augustinian.

[6] Or in the Westminster Confession: “Faith, thus receiving and resting on Christ and His righteousness, is the alone instrument of justification: yet is it not alone in the person justified, but is ever accompanied with all other saving graces, and is no dead faith, but works by love.” Westminster Confession of Faith. “Of Justification,” Chap. 11.2.

[9] Like all analogies, there are a few points where the Costco Card breaks down, like when your membership is complete you must purchase another one. You will also perform another monetary transaction when you buy products from the store. For some reason, I find these payments are always quite large.