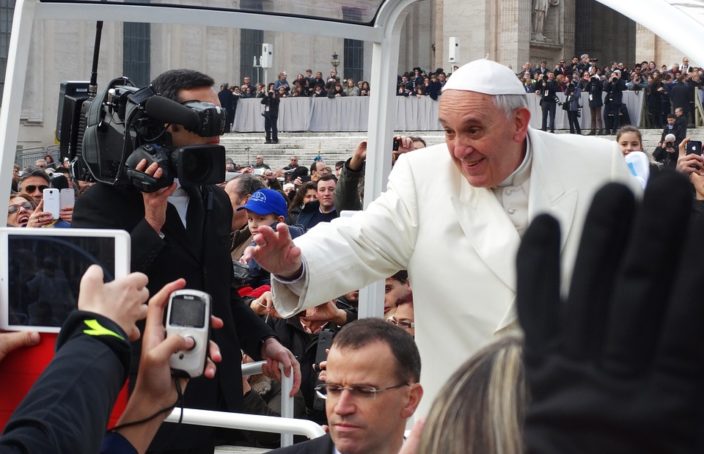 Is Christian unity dependent on a central Bishop of Rome, a unity to which Protestants should give their allegiance? The answer is surely yes, if we recognize the pontiff as the divinely appointed Vicar of Christ. But is he?

With this question in view, Professor Kenneth J. Stewart’s new book In Search of Ancient Roots examines the historical claims for papal primacy: arguments from the First Vatican Council, restated at the Second, and John Paul II’s (1995 Encyclical), Et Unum Sint (that We May Be One). Professor Stewart, however, is unconvinced by these claims. Reasons include the modest theological prowess of the early papacy, the recurrence of rival anti-popes, and the escalation over time of the papacy’s honorific claims, which, he suggests, has inflated the pope’s importance. Stewart concludes by proposing two lenses for future perspective.

First are reasons why evangelical Protestants are unlikely to kiss the ring:

Any evangelical who disagrees with Stewart on these conclusions will be the exception to the rule. But in addition to obstacles, he also highlights aspects of the papacy that are undisputed.

Here again, neither of these suggestions is controversial among Protestants. But can we recognize additional claims of the papacy as undisputed? Some would suggest, for example, that the pope is also the “vicar of Christendom,” that is, the chief ambassador of the Christian tradition, speaking to the world on matters of moral and political concern?

For instance, this phrase (“Vicar of Christendom”) was employed in 2007, following Pope Benedict’s speech at Regensburg, where he was viewed by the Muslim world as having denigrated Muhammad. This led, as you know, to an open letter by Muslims titled “A Common Word Between Us and You.” Originally signed by 138 Islamic leaders, it drew from sectors of the Muslim world that often oppose one another. But on this occasion, they joined to speak with one voice. Which Christian leader could possibly provoke such a response and galvanize such unity—the Bishop of Rome—the “Vicar of Christendom,” in the view of some.

Advocates of this view have pointed to the Muslim statement as an example of how the pope, head of the largest community of baptized persons, commands attention, speaking with an unparalleled level of authority. They see the papacy as a function of providence, an extraordinary platform and public voice, promoting morality, grounded in natural law, guided by Scripture.

However, there are problems with this viewpoint. The word “vicar” isn’t quite right, because Christ is not absent. Moreover, if evangelicals were to affirm such a role, they would insist that the pope elucidates the person and saving work of Jesus Christ. Unfortunately, this Christ-centered approach is not a regular part of the current pontiff’s ministry. One thinks, for example, of the speeches Pope Francis delivered to the US Congress and United Nations, neither of which so much as named “Jesus” or “Christ.” Or his remarks at Cairo’s Al-Azhar University, arguably the most important institution of the Sunni world, where the Savior’s name was again excluded.

At the time, there were some who sought to explain these omissions by reminding us that beyond his role as pastor and pontiff to all Catholics, the pope is a head of state. Thus, the so-called “Vicar of Christ” spoke as a delegate of the Vatican, but not as a representative of Christ. Please pardon me, but in the words of one Catholic scholar friend, “That is boloney.” Imagine Peter, Paul, or any of the apostles missing such an opportunity to preach Christ crucified. One need not be an evangelical Protestant to recognize this imperative.

So while we may not add to professor Stewart’s list of undisputed claims the appellation “Vicar of Christendom,” we might nevertheless find ways of recognizing the pope’s public voice in the civil arena when promoting the common good. How should the pope’s position, and the opportunities it garners, guide our prayers? How can we express dissent when the pope opens his mouth about life, death, and the kingdom of God, without mentioning the name of Jesus? And how can such events provide lessons—either positively or negatively—that advance the work of evangelism and discipleship in one’s local context. These are questions worth asking.

These comments originated as part of a paper delivered at the Evangelical Theological Society panel responding to Ken Stewart’s book, In Search of Ancient Roots.