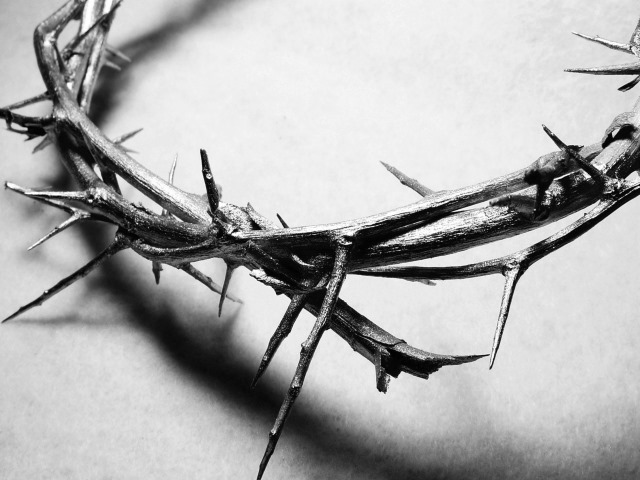 This Sunday we’ll consider the sacrificial love of God, a kind of love that reminded me of something I wrote a few years ago, the beautiful and challenging story of Ian and Larissa who actively loved one another in the midst of anguish.

Ian and Larissa, like many other couples, met in college. They were both believers in Jesus Christ, and pretty soon the relationship got serious. Ian began shopping for an engagement ring. They planned to get married in December 2006. However, 10 months into their courtship, while Ian headed to work in Pittsburgh, the white station wagon he drove was involved in a horrible crash.

Larissa got the call to come to the hospital, and one of her first thoughts was, Please don’t let it be a brain injury. But in God’s sovereignty, it was a traumatic brain injury, and Ian had to undergo surgery. Physically, he would never be the same.

Suddenly Larissa’s life was turned upside down—to say nothing of Ian’s. Their hearts had been knit together in love, and now she was faced with the uncomfortable truth that the man she loved would no longer be able to do what couples took for granted: cook dinner, drive her somewhere, even hold her in his arms.

Unlike so many others, Larissa’s first response was not to bail out when the times got tough. She was involved in Ian’s rehabilitative therapy. It was clear, however, that a full recovery was not possible. And yet this remarkable couple continued to “date” one another, and Larissa knew of Ian’s continuing desire to marry her.

Larissa resolved, however, not to make that kind of commitment if Ian could not communicate with her. As the agonizing therapy and limited recovery continued, Larissa and Ian saw their friends getting married, and their joy for friends was tempered by sadness over their own circumstances.

As Ian worked at his therapy, their communication slowly improved, although with less clarity and detail than before. Larissa knew, however, that Ian would never walk out on her if their roles were reversed. She also knew that God would be faithful in the midst of their marriage.

So, four years after the accident, Larissa and Ian tied the knot. Larissa admits,

Marrying Ian meant that I was signing on to things that I don’t think I ever would’ve chosen for myself—working my whole life, having a husband who can’t be left alone, managing his caregivers, remembering to get the oil changed, advocating for medical care, balancing checkbooks, and so on. The practical costs felt huge, and those didn’t even touch on the emotional and spiritual battles that I would face.

Yet Larissa Murphy is finding God more than faithful. Larissa says that although her husband cannot do the secondary tasks common to marriage, he still does the primary one, which is to provide spiritual leadership. And Larissa is providing something just as striking: an example of Christ-like love.

And so everyone rejoices with the miraculous Murphys, right? Wrong. Responding to Amy Julia Becker’s post lionizing this couple, some commenters offer only two cheers—or even fewer.

“It’s a sweet story, but makes me uncomfortable,” a poster identifying herself as “Ann” says. “Maybe especially because it’s been so publicized. Is it fine they made this choice? Yes. Did Larissa need to marry Ian? No. It is one thing to stay with a spouse if they suffer a disability during marriage, but that type of commitment is not required prior to marriage.”

Another reader, “Bethany E.,” expressed doubt whether the marriage of Ian and Larissa is really a joining of equals: “It’s hard to get that . . . from watching the video, as the only time we see Ian talking, he’s expressing things that an 8-year-old with Down syndrome could express. There’s a huge difference between knowing that God loves you and having the mental and emotional capabilities to be a spiritual leader, as Larissa says Ian is.”

“Tamara,” meanwhile, stated, “This made me very sad. You can show Christ-like love to someone without binding yourself to him/her in marriage.”

The Offense of the Cross

What’s behind this unease? Certainly no one praising Larissa says her radical act of love is required by God for everyone facing similar circumstances. We have different gifts and callings, after all.

Such discomfort about Ian and Larissa may reveal a fundamental misunderstanding of Christian marriage. The Bible portrays marriage—especially when entered into by believers—not as a contractual agreement between two parties, but as a covenant relationship before God. Ian and Larissa Murphy know this.

“We know that we have made a covenant to each other, just as Christ made to the church,” Larissa says. “The church that he made that covenant with is so imperfect, and sorrowful, and disabled. Just like our marriage. This church, and this marriage, are hemmed in by Jesus and eagerly long for heaven. He is their author and sustainer.”

Perhaps if more Christians viewed marriage this way, our rates of marital breakup would differ more markedly from those of the world. Marriage is not a contract in which each person expects to receive equal benefits in return. It is a covenant meant to mirror the relationship of Christ and his church, in which each partner lives selflessly for the good of the other (Eph. 5:25-33).

We talk a lot in both church and in culture about the virtue of being radical. Friends, this kind of self-giving love is radical. Maybe that’s why something so obviously good is also so offensive. Truth be told, we don’t really want to be truly radical most of the time.

This shouldn’t surprise us. We talk about “the offense of the cross.” What’s offensive about it? Simply this: The cross tells us that we are lost, ugly, helpless sinners whose only hope is in the grace and mercy of a God who took the punishment that we richly deserve. Our pride is offended when we learn we contribute nothing to our own rescue.

I’m not sure that Larissa would characterize her actions as selfless or even as sacrificial. After all, she and Ian love one another, and love sometimes requires radical things. The question is not whether she was required to do this, or whether we would be. The question is whether we are ready to love selflessly, the way God loves us.

If we do, don’t be surprised if others take offense.