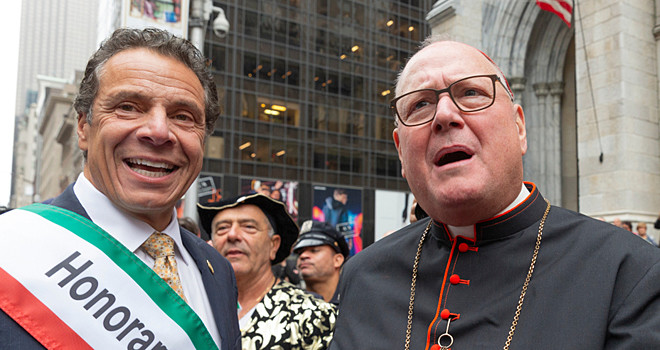 Last week on the 46th anniversary of Roe v. Wade, New York Governor Andrew Cuomo signed the so-called Reproductive Health Act, a monstrous law that permits babies to be aborted up to the day of birth.  So how is the church responding?

A Time for Church Discipline

When asked about the law on Fox & Friends, New York Cardinal Timothy Dolan called it “ghoulish, grisly, gruesome.” But when asked whether Governor Andrew Cuomo should be excommunicated for signing it, the New York Cardinal said that such a response by the Catholic Church “would be counterproductive,” providing “ammo to our enemies.”

Co-host Steve Doocy then said to the Cardinal, “But the Catholic Church stands against abortion. And here is the most prominent Catholic in the state of New York, and he’s saying, ‘Eh, this is a good thing!’”

Cardinal Dolan responded, “The Canon Law [915] you quoted also says you have to use [excommunication] for medicinal purpose and you think there’s going to be a good effect that can come out of this . . . He’s not going to be moved by this. So what would be the use?”

Doocy then followed up, “What about denying him Communion?”

After stuttering, Cardinal Dolan said, “Well, look, that’s – I don’t rarely get restless but I am – that’s kind of a pastoral issue that I think one has to talk to him about, and I think proper people have. And I’d be uncomfortable going into that, rather spiritual and pastoral. That’s a good point. Not denying him [communion]. He may have already said, ‘I cannot approach the sacrament.’”

The Courage of Ambrose

As the interview unfolded, I found myself thinking of the great Bishop of Milan, Ambrose (387-397). We might think of his legacy of preaching, congregational hymn-singing, and his contribution to the conversion of Augustine. But Ambrose is also remembered as a prophet who spoke truth to power. He opposed Emperor Valentinian when he began to show increased tolerance to paganism. And in 390 AD he disciplined Emperor Theodosius, who had ordered a gruesome massacre of thousands of citizens in Thessalonica. These examples of Ambrose’s courageous leadership, proclaiming truth and calling tyrants to repentance, provides a helpful corrective to Cardinal Timothy Dolan’s response and a reminder to us all of what’s needed at this moment.

The bold bishop remembered that the powerful need to hear truth for the sake of their souls. To Emperor Valentinian, Ambrose cautioned, “O Emperor, since you see that if you decree anything of that kind [of injustice], injury will be done, first to God, and then to your father and brother, I implore you to do that which you know will be profitable to your salvation before God” (Letter, XVII).

Notice the God-focused framework in which Ambrose operates, exhorting the Emperor to first recognize his situation vertically—with reference to God—and to then consider his own salvation. The language of entreaty also brings to mind the Apostolic precedent of Paul: “We implore you on behalf of Christ, be reconciled to God” (2 Cor 5:20).

When Ambrose addressed Emperor Theodosius, the Bishop of Milan offered another crucial lesson that the Cardinal should heed. “What do you desire, shall I come to you with a rod, or in love and in the spirit of gentleness?” Ambrose wrote, quoting Paul to the Corinthians, emphasizing that the Apostle first “made mention of the rod, and like the almond rod struck those who were wandering, that he might afterward comfort them in the spirit of meekness” (Letter XLI).

“Are you ashamed, O Emperor, to do that which the royal prophet David, the forefather of Christ, according to the flesh, did?” Ambrose later wrote to Emperor Theodosius, after the massacre of Thessalonica. The king had realized that he himself was being condemned when Nathan confronted him with the story of a ruthless tyrant. The Emperor, Ambrose counseled, should likewise “listen obediently to this and say: ‘I have sinned against the Lord.’” (Letter L.I.).

If Nathan the prophet confronted King David, and Ambrose stood up to the Emperor Theodosius, how should the Cardinal respond, as Governor Cuomo leads New York into another slaughter of the innocents? Surely New York needs church leaders who will proclaim truth—like Ambrose and Nathan before him—with a prophetic unction that confronts wickedness with the truth of Christ, refusing to rely on nominal faith for its size, strength, and stature.

Moments like these require pastors with theological integrity and courage. Chests are needed to support pectoral crosses.