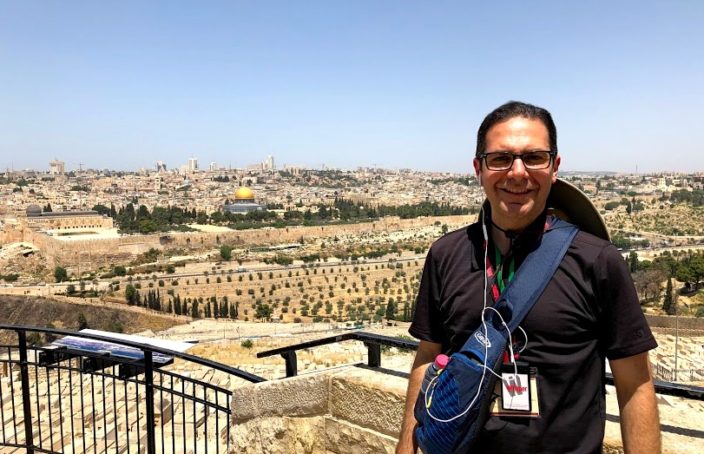 It was time. Since the fourth century, Christians have toured the land of Israel. “It is like visiting the home of a beloved friend,” one pilgrim suggested. “No matter how well you know the person, you understand him better having experienced his native environment.” So we landed in Tel Aviv on Monday afternoon and made our way north toward the Sea of Galilee.

The blue-green water of Galilee shimmered in the sunlight against a backdrop of pinkish sandy hills. From these shores, which once hosted a thriving fishing industry, the disciples heard Christ’s call: “Follow me and I will make you fishers of men.” Here Jesus also calmed a furious storm, causing the disciples to marvel, “What sort of man is this, that even winds and sea obey him?” (Matt 8:27). Hours later, with eyes transfixed upon the lake from my hotel balcony, the disciples’ words captured my attention. “What sort of man is this?” Sure, we confess the incarnation: “For us and for our salvation he came down from heaven….” But how shall we understand the divine-man Jesus? And then it hit me like never before. The God who created all things, who abides in unapproachable light, whose splendor fills the heavens, and whose holiness struck dead a presumptuous Uzzah for touching the sacred ark—this God has stooped down, way down, into our broken and rebellious world to become one of us. In the words of Dorothy Sayers:

[It is impossible to measure the condescension of Jesus] unless one realizes that He was born, not into an allegory, or a devotional tableau (portrait), or a Christmas card, with everybody behaving beautifully; but into this confused, coarse, and indifferent world, where people quarrel and swear, and make vulgar jokes and spit on the floor. He was a real person, born in blood and pain like any other child. The descent of Jesus into our daily struggles was the impulse of his life. This was evident, for example, when we visited the ancient city of Capernaum, the place where Christ frequently taught in the synagogue (the foundation stones of which are still visible) and where he performed many miracles. The New Testament describes Capernaum as his “own town” or the “home” to which he returned (Matt 9:1; Mark 2:1). Amid these stones, I walked and imagined how they saw Jesus heal the sick, deliver the demon-possessed, and how they heard him identify as the “bread of life” (John 6:24-59). Somewhere within a bocce ball toss was Jesus’ guest room made of black basalt stone, covered by wooden rafters, layers or reeds, grass, and mud. This was no majestic metropolis – it was a regional town. And here Christ emptied himself, taking the form of a servant, living in the likeness of men. From Capernaum, we headed southward to Jerusalem. Upon arriving at the Holy City, we visited the Garden of Gethsemane, a fertile oasis in the valley between the eastern wall and the steep Mount of Olives. I was surprised by the nearness of the Garden to the city of Jerusalem. Standing there, I envisioned Jesus praying to the Father, looking up at the nearby temple and imagining his future. Only a few minutes stroll in the opposite direction would have brought him to the open desert, a simple escape from his enemies—a temptation that he thankfully resisted. “Going a little farther,” Matthew tells us, “he fell on his face and prayed, ‘My Father, if it be possible, let this cup pass from me; nevertheless, not as I will, but as you will.’” (Matt 26:39).

After his struggle in prayer, Jesus faced the betrayal of Judas and was arrested (Matt 26:36-56). The events that followed are complex. Jesus’ “trials” include three inquisitions—before Annas and Caiaphas and then before the assembled Sanhedrin. Each inquest was a kangaroo court, which found Jesus guilty of blasphemy. And the penalty for blasphemy was death; a verdict that was made official by Pontius Pilate when he washed his hands and sealed Jesus’ fate.

Prior to his crucifixion, Jesus was beaten and whipped. The soldiers mocked him, maliciously adorning his bloodied body with the symbols of royal power: a purple cloak, a reed, and a crown of thorns. A crossbeam was put upon his shoulders and he was shoved into Jerusalem’s sunlight to commence his death march. A week earlier, he had processed through the streets amid cheers of adulation. Now he traveled them as a rank criminal bearing the weight of the world. The Via Dolorosa (Way of Sorrows) is the traditional route by which Jesus walked toward Golgotha. The fourteen stations of the path mark the concluding moments of our Lord’s life. Today, the route is typically filled with merchants hawking their wares. We were fortunate, however; nearly all of the shops were closed on the day of our visit due to a certain Muslim holiday. This allowed us to walk the path in relative quiet, imagining the pain and anguish that attended Jesus’ stumbling steps.

The destination of Jesus’ trek was Mount Calvary, a site that is now home to the Church of the Holy Sepulchre. The historian John Beck, in his book The Holy Land for Christian Travelers, describes it as “the most important place in the world, the one location in Israel every Christian [traveler] must visit. The Church of the Holy Sepulchre is where our sin debt was paid. It is where heaven became our home. It is where Jesus died on the cross and rose from the grave.” I would agree. The dimly lit interior of the Holy Sepulchre contains a bewildering complex of structures. Upon entering, one is greeted by a set of low-slung oil lamps set before a panoramic depiction of Jesus’ crucifixion. Around the entrance is an intricate layout of chapels, corridors, and artwork. Our guide led us toward a stairway on the right-hand side beneath a stone arch. It eventually occurred to me that these steps led to the summit of Calvary, the very hill on which Jesus died. How often I’ve stood before congregations and preached about this place. But now I was speechless, overwhelmed with a sense of awe and unworthiness. The words of Ah, Holy Jesus, How Has Thou Offended occurred to me:

Who was the guilty? Who brought this upon thee?

‘Twas I, Lord Jesus, I it was denied thee;

For me, kind Jesus, was thy incarnation,

thy mortal sorrow, and thy life’s oblation;

thy death of anguish and thy bitter passion,

I do adore thee, and will ever pray thee,Therefore, kind Jesus, since I cannot pay thee,

think on thy pity and thy love unswerving,

Worship has never sprung from my heart quite as it did at that moment. Returning to the main floor of the church, we approached the Tomb of Jesus. Housed within an “Edicule”—a miniature church structure within the church—the entrance is flanked by tall candles, with a small door set into a façade of rose marble. It was built to replace the sides and roof of Jesus’ original tomb, which was destroyed in the eleventh century. Since we lacked time to wait in the mile-long line, we took a few minutes to observe from the outside and consider its significance: This is the place. The violent earthquake, the angel who appeared like lightning, the stone rolled back, terrified soldiers, faithful women arriving at sunrise, victory over sin and death, the dawning of the new age, Christ’s body risen, ground zero of the gospel.

My experience of the Holy Sepulchre has continued to generate thought. Since returning a few weeks ago, I’ve compared the experience to visits we’ve made to other homelands, such as last year’s family vacation to Springfield, Illinois where we toured the house and haunts of Abraham Lincoln. Or prior to that when I visited Oxford (England) to see Littlemore and stand at the desk where John Henry Newman penned his theological works. Or before then in Lucca (Italy) at the marble pulpit of San Frediano where Peter Martyr Vermigli preached and saw gospel renewal transform the city. All of these visits were inspiring; however, they were fundamentally different from my experience in Jerusalem.

The difference, it turns out, is the central insight of my trip to the Holy Land. Because Jesus is categorically different from every other person in human history—the resurrected Lord and Savior who now lives and reigns through his people—we enjoy his real, personal, and redemptive presence, which continues throughout life regardless of where we find ourselves. Whether we’re standing in the Church of the Holy Sepulchre, in Chicago, or in the city of N’Djamena in Chad, Christ’s promise remains true and changes every dimension of our life and calling. “Why do you look for the living among the dead?” angels asked some previous visitors to that very tomb.

This is my prime insight from the land of Israel. In the words of Jesus to his disciples, “Behold, I am with you always, to the end of the age” (Matt. 28:20).