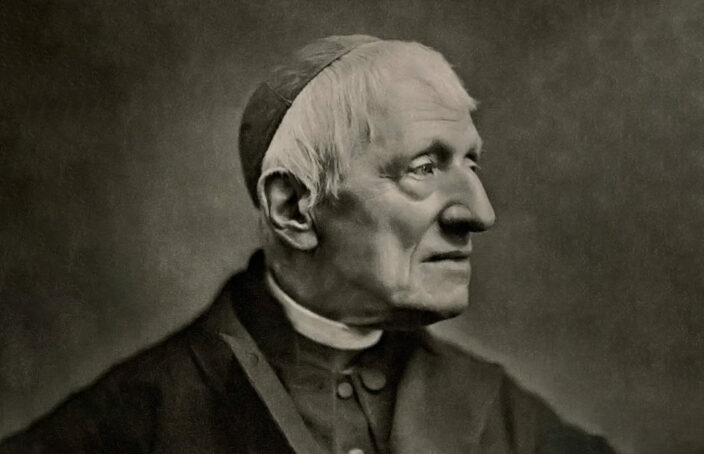 I sat in a pew this past Sunday looking up at Paul, an intern from many years ago, as he prepared to pray. Sitting beside me was our missions festival speaker, Collin, also an intern from those ancient days. It was a memorable moment in which to thank God for the privilege of participating in the lives of these men who are now global leaders for Christ. And it was a moment to reflect upon the importance of mentors and friends in ministry.

With the canonization of John Henry Newman in Rome today, I find myself thinking about mentoring against the backdrop of his legacy, particularly the way he invested himself in friends and colleagues. After nearly four years of researching Newman (in a PhD. thesis that became the book, Justified in Christ), I found this to be a striking part of his ministry—the countless people he equipped and encouraged throughout his lifetime. Naturally, as a Protestant, I reject the Roman Catholic practice of canonization, and I’m hardly a “Newmanophile;” but there is something about Newman’s personalist approach to discipleship that is desperately needed today.

As a starting point, Newman stressed that God’s self-revelation is fundamentally personal. Of course, our relationship to Christ is not immediate, as it was for the Apostles upon the Judean mountainside. But the incarnation and subsequent pouring forth of the Holy Spirit provides access to the persons of God. This gift exceeds the mere forgiveness, for the recipient has received an even greater gift: the very presence of God. This notion is elucidated in Newman’s famous hymn, Praise to the Holiest in the Height:

Which did in Adam fail,

Should strive afresh against the foe,

Should strive and should prevail;

And that a higher gift than grace

Should flesh and blood refine,

God’s Presence and His very Self,

Thinking with the Eastern Tradition, Newman examined the inner Trinitarian relationship of the divine persons to highlight how divine life condescends to engage human hearts. He concluded that it is in the Son of God who “came down on earth, and who thus, though graciously taking on Him [self] a new nature, remained in person as He had been from everlasting, the Son of the Father.”[2] Accordingly, the Son—precisely because he possesses the same nature as the Father and the Spirit—is never considered in abstract isolation from the members of the Godhead (as popular evangelicalism was susceptible to doing); rather, the Triune Deity in personal communion is the starting point for understanding the mission of the Incarnate Christ.

Newman’s appreciation for the communal intent of Christ’s mission was enhanced by the teaching of St. Ignatius of Antioch, which highlighted the Trinitarian activity in salvation such that it “continually invites Christians into a divine community of love.”[3] What a beautiful image. Imagine God personally inviting his children into the ongoing interchange of divine affection. For example, in his sermon titled “The Mystery of Godliness,” (published 1840) Newman asserts:

[Christ] has taken our nature, and in and through it He sanctifies us. He is our brother by virtue of His incarnation, and, as the text says, “He is not ashamed to call us brethren;” and, having sanctified His nature in Himself, He communicates it to us.[4]

When Newman uses the plural “us” he wishes to stress, in contrast to the growing individualism of his day, the community of God’s people. Given this corporate identity—that we are comembers in Christ’s Body—it is unconscionable that Christians would exploit one other for selfish gain. What is more, in distinction to the evangelical emphasis upon the real church as invisible, Newman stressed that the church, even with its peculiar and irritating people, is a gloriously embodied outpost of heaven; the holy temple in which God’s presence dwells.[5]

In applying this doctrine to the enterprise of discipleship, Newman regarded the church as a tangible gift, extending from Christ himself. Basic to this gift was the sacredness and singularity of other persons, men and women with whom we enjoy an eternal bond. Through these Christian friends and fellow church members, God manifests the warmth of his presence, providing comfort, healing, and hope.

Here are some examples from Newman’s life. A cursory reading of his letters and diary entries reveals a great deal of personal warmth and concern for his friends. One immediately notices this in his standard signature, “Ever Yours Affectionately, JHN,” (or variations thereof). At times, Newman also expressed such affection to a third party. Here is a line from a letter he wrote to H. A. Woodgate about their common friend Hope-Scott: “He is a man I love with my whole heart, and his loss to me is very grievous [sic].”[6] Similarly, he wrote to Lady Herbert of Lea regarding another friend: “It is pleasant to hear you talk so warmly of Isy Froude—I love her so much.”[7] When Newman felt he had been insensitive to a friend, he did not hesitate to apologize and ask forgiveness. Writing to Henry Wilberforce, one of the more famous pastors that he mentored, he wrote the following: “A fear has come over me lest I should have been severe in my last letter. I dare say I may have worded what I said unkindly and have hurt you; if so, I am very sorry.”[8]

What motivated Newman to express such deep affection and fidelity to his friends? Once again, it started with the personal nature of God’s self-revelation, a love that condescends to engage our hearts, and invites us into the ongoing interchange of divine affection. Far from an individualized spirituality, this faith consists in relationship to others, the tangible gift of Christ’s Body.

This is precisely our opportunity and calling—to look around and see those whom God would have us engage with Christ’s love: interns, friends, colleagues, and church members. Take them out for lunch or coffee. Look them in the eye and inquire into how they’re doing. Write them notes of encouragement. Pray for them. Give them books. Take an interest in their families. And who knows, maybe one day you’ll have the privilege of seeing them on a platform, or worshipping beside them in a pew, the blessed fruit of friendship in Christ. And thus God’s kingdom advances, as the Apostle Paul states, “What you have heard from me in the presence of many witnesses entrust to faithful men, who will be able to teach others also” (2 Tim 2:2).

[3] Dessain, Spirituality, 67. Newman explains how the atonement is “continually” being applied to the church in his Lectures on the Doctrine of Justification, 202-204.