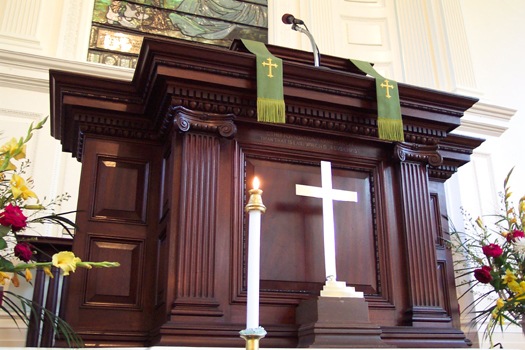 It happens every week—same time, same place. Just before I preach, I look out upon the congregation. Then I think: How can simple words penetrate the souls of men and women, lift them from the mire of sin, impart hope, and engender heartfelt worship.

In those brief moments before I begin to preach, as the arrows of doubt arrive from every direction, I have a few counterattacks ready. I repeat the words of Spurgeon, echoing the Apostles’ Creed, “I believe in the Holy Spirit,”which is exactly what I need to remember when imagining that the impotence of my words might thwart God’s work.

The words of Scripture, precisely because they are the words of God, are inherently authoritative. This is why we have the audacity to preach.

I repeat another mantra directly from our Lord Jesus: “Your word is truth” (John 17:17). The words of Scripture, precisely because they are the words of God, are inherently authoritative. Indeed, this is why we have the audacity to preach. Since God has appointed his Word as the means by which we are drawn into the light of his presence, it does everything I can’t. “Your word is truth. Sanctify them by the truth; your word is truth.”

The authority of Scripture also presents a problem for those we serve. While humanity’s rebellion against authority is on full display in our secular age, it’s a longstanding tradition of our race. Ever since Adam and Eve tasted the forbidden fruit, we’ve been unwilling to submit to God’s direction. And with this resistance escalating and deepening over time, previously accepted forms of delegated authority have been increasingly held in contempt: family, education, law, and church. All of this reflects humanity’s disdain for the world’s ultimate authority—God.

So how does this affect the sermon, one of the primary ways God speaks to the world? “Don’t preach at me” is a popular idiom that expresses the moral autonomy we’ve claimed for ourselves since the fall. To “preach” is to harangue with tedious or unwanted demands. We may not hear churchgoers flaunt this attitude openly, but its influence is tangible, especially when preachers resort to feel-good homilies devoid of scriptural substance. It is equally noticeable in the degree of biblical illiteracy among contemporary Christians. Too often, if Christians do not encounter God’s Word in the pulpit, they will not encounter it at all.

Before we expositors get too self-assured, let’s recognize that we too struggle with authority. Even those of us who attend exposition workshops, who have a picture of Martyn Lloyd-Jones hanging gracefully in our study, and who regard ourselves as defenders of truth, have moments in which we kick against the goads. We are, after all, sinners preaching to other sinners, a fact that should draw unction from a place of humility before God. As P. T. Forsyth wrote in 1907, “It is authority that the world chiefly needs, and the preaching of the hour lacks an authoritative gospel in a humble personality.” All of us, then, must consider how to balance earnest confidence in Scripture and sober-minded suspicion of ourselves.

Here are four ways we might achieve that balance.

While much doctrinal discussion rightfully deals with Scripture’s authority, inspiration, and sufficiency, we must remember that God’s word is also effective (2 Tim. 3:14–16.)

On account of Scripture’s inspiration, Paul maintained a deep and profound expectation that its communication would be effective. In this context Paul issues his famous admonition, “Preach the word; be ready in season and out of season” (2 Tim. 4:2). This is good news for preachers. The effectiveness of our proclamation doesn’t derive from persuasive oratory, which is to say we’re not responsible for making God’s Word effective. The Word, alive with God’s purpose for it, is inherently effective. May we preach it with expectation.

Sermon preparation is hard work. Sometimes preachers struggle to find the requisite motivation to remain diligent in the study and not cut corners. In such moments, we must recognize the authoritative character of the text—that God, by his own authority, moved biblical writers to record his intended message (2 Pet. 1:21). This assumption (that there is divinely inspired meaning in the text) is a motivating force that drives preachers to fulfill their weekly responsibility of sermon preparation.

Because God inspired biblical texts in particular contexts, we must devote time and energy to studying those particulars in order to apprehend God’s intended message. At the bottom of this activity is the authority of the divine source, which ensures that study isn’t just worthwhile; it’s essential.

This is not a human addition to preaching, since exhortation and application are the intended purposes of God’s Word. Yes, biblical preaching should inform the mind, but it should also encourage and admonish the heart. Paul explains how God’s Word is profitable: “the man of God [becomes] complete, equipped for every good work” (2 Tim. 3:17). Like Paul, we preach the Word as shepherds seeking to nourish the flock under our care.

The Bible envisages heralds who passionately announce the good news after they’ve been personally gripped by it. In the Old Testament, Jeremiah said of his preaching:

This burning appears in the New Testament with the day of Pentecost, about which Jesus said, “You will receive power when the Holy Spirit has come upon you, and you will be my witnesses” (Acts 1:8). A key aspect of this gift is what the Puritans called “unction.” How does unction function? It’s an anointing a preacher perceives in the straight line from the throne of God to the authority of a text, through the authority of a preacher’s call, to the divinely appointed moment when that preacher heralds the gospel, to the instant when its truth and beauty penetrate human hearts.

There can be no recovery of biblical preaching if we don’t recover the conviction that the preacher’s task is enabled by heaven’s authority. The nature of the inspired text, the expectation of its effectiveness, the exposition that yields insight, the supreme relevance for people, and the unction in which it is proclaimed are all predicated on this truth.

Yes, the fiery darts will come, especially in the moment immediately before we open our mouths. But that’s also the moment when divine authority begins to work through the servant of the Word to transform human hearts. Therefore, with confidence and humility, may we continue to preach.