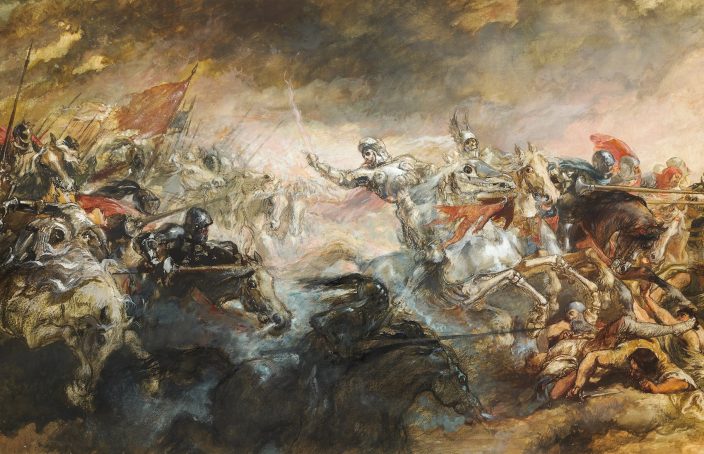 “God has called us not to a playground, but to a battlefield.”

My friend Scott Mackenzie of Edinburgh stated this while we were in Bible college. Even though we were young and untested in spiritual combat, his words rang true then, and they resonate even more today.

Along with many fans of J.R.R. Tolkien, I have mixed emotions about Amazon’s adaptation of his work in the new series, The Rings of Power. Estimated to be one of the most expensive productions in television history, the show exhibits marvelous cinematography but doesn’t always convey the characteristic Tolkien ring (pun intended). My feelings about the series aside, a scene in the final episode of the first season beautifully illustrates what my friend Scott articulated.

Spoiler alert! Stop reading now if you don’t want to know about a vital character reveal.

In this scene, Galadriel discovers that the man she thought was the king of the Southlands is really the evil villain Sauron. Their climactic confrontation is not waged on a sprawling battlefield, swords clashing. Rather, it occurs in Galadriel’s mind as Sauron tempts her to forget who she is and forgo her mission.

This confrontation is consonant with the New Testament picture of spiritual battle. In the final chapter of his Ephesian letter, Paul describes the “evil day” in which the spiritual forces of this present darkness assault the people of God (Eph. 6:12), a day in which you and I sit in the crosshairs of demonic opposition. Maybe you’ve had this sort of day. Temptation seems to emerge at every turn, and, like Galadriel, your mind is filled with confusion. On such a day, what does a faithful response look like?

First, we must remember who we are in Christ. This, you might say, is the central conviction of Paul’s Ephesian letter: our lives are now grounded “in Christ.” No longer estranged from God, we are raised in resurrection power, seated in the place of authority and peace. Yes, the evil day makes us feel vulnerable, disillusioned, and alone—but, in fact, we are fortified with every spiritual blessing (Eph. 1:3). God’s empowering grace protects us like military armor—a provision, however, that only covers the front and not the rear. Therefore, retreating is not an option. Rather, we face the raging battle with divine strength, trusting the One who has called us.

Second comes our mode of operation. In the Rings of Power scene, Sauron is extremely crafty. Speaking as an angel of light (appearing to Galadriel as her beloved brother, Finrod), Sauron promises peace and salvation. It is so positively convincing, and yet his goal is to enslave Middle Earth. So it is with the Prince of Darkness in our spiritual battles. The devil tempts us with what we think we want, only to replace it with misery.

In the face of such deceptions, Paul directs us to find the truth in God’s Word, for “truth is in Jesus” (Eph. 4:21). To be sure, Christian love “bears all things, believes all things, hopes all things, endures all things” (1 Cor. 13:7). In other words, it seeks to understand a situation from another’s point of view and offers that person the benefit of the doubt. In contrast, whoever lives in a constant state of suspicion and trusts no one is a troubled soul. However, we mustn’t be so open-minded that our brains fall out! The mental battle we face requires us to be honest and to take “every thought captive to the obedience of Christ” (2 Cor. 10:5).

Perhaps the most exemplary part of Galadriel’s response to Sauron is her commitment to advancing the light of truth and righteousness upon the shadows of evil, even at great personal cost. This is her conviction. Recognizing the Dark Lord’s deception, she lifts her dagger to his throat, an attack that inadvertently sends her beneath the raft on which they stand, into the deep water below.

This, it turns out, is not the first time she has plunged into the Great Sea. In an earlier episode, just before arriving in a great ship at the heaven-like Undying Lands across the ocean, Galadriel leapt overboard to continue her fight against the enemy. She was prepared to sacrifice herself, even to the point of death. So it is for the church. We are not called to ease, comfort, and pleasure, but to a battle.

As Scott Mackenzie stated so well, to be a Christian—a man or woman in Christ—is to oppose the darkness that exalts itself above the supremacy of Christ. Our lives are given to us to confront darkness, starting with the sins that lurk in our own hearts. Until our King returns, the battle rages on. We can’t run, we can’t hide, we can’t retreat. “Therefore,” says Paul, “take up the whole armor of God, that you may be able to withstand in the evil day, and having done all, to stand firm” (Eph. 10:13).