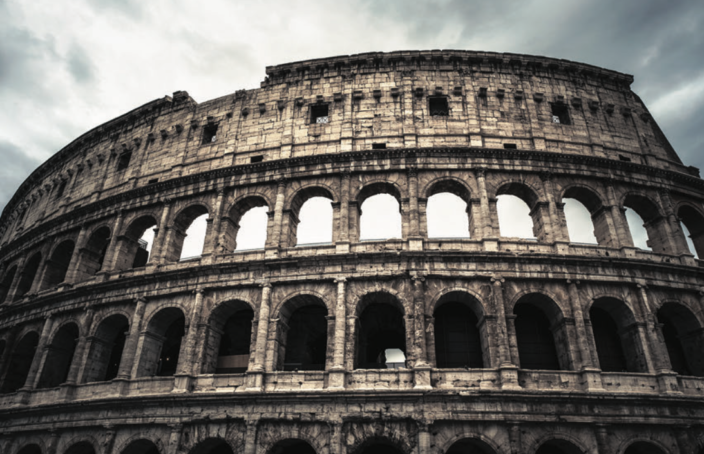 Caesarea, a major city of the Roman Empire, had recently been afflicted by famine and war. When the plague hit in the early fourth century, the already-weakened people living there were devastated. Men and women began fleeing for safety in the countryside.1 However, at least one group decided to stay behind and risk their lives—the Christians.

Eusebius, the city’s bishop, recorded that during the plague, “All day long some of them [the Christians] tended to the dying and to their burial, countless numbers with no one to care for them. Others gathered together from all parts of the city a multitude of those withered from famine and distributed bread to them all.”2

Eusebius added that because of their compassion amid the plague, the Christians’ “deeds were on everyone’s lips, and [the people] glorified the God of the Christians. Such actions convinced them that they alone were pious and truly reverent to God.”3

With few sewers existing, the overcrowded cities in the ancient world were filthy beyond imagining and were horrible breeding grounds for disease.4 Despite being visited regularly by all manner of disasters, cities were also the population and intellectual centers of the empire. As the Apostle Paul knew and practiced in his missionary work, these cities provided Christians with opportunities for numerical growth and cultural influence. Indeed, Christianity eventually dominated the empire by taking root in almost all the major cities of the ancient Mediterranean world, from Alexandria in North Africa to Cordova in Spain.5

A few decades after the Caesarea disaster, the last pagan emperor, Julian (who would come to be called “the Apostate”), begrudgingly recognized that the Christian practice of compassion had helped to transform the Christian faith from an afterthought on the edge of the empire to significant cultural influence. Writing to a pagan priest, Julian observed, “[W]hen it came about that the poor were neglected and overlooked by the [pagan] priests, then I think the impious Galileans [i.e., Christians] observed this fact and devoted themselves to philanthropy.”6

To another, he complained, “[They] support not only their poor but ours as well, all men see that our people lack aid from us.”7 In fact, Julian proposed that pagan priests imitate the Christians’ charity to bring about a revival of paganism in the empire.

But his program failed because the polytheism of ancient Rome could not sustain the kind of self-sacrificial love and compassion that Eusebius had observed in Caesarea. Christianity presented to the ancient world two theological truths absent from the pagan religions: (1) the God of Jesus Christ is a God worth dying for, since He had first demonstrated His love for humanity by sending His Son; and (2) all human beings have special dignity and should therefore be shown compassion.8

These two ideas, not military or political conquest, slowly but surely transformed the culture of the Roman Empire. Today, as the West appears to be returning to paganism, the distinctiveness of the Christian doctrines of God and of man will once more stand in stark contrast to the surrounding culture.

How? Not by our wielding the sword or by implementing a comprehensive political program, but by the consistent preaching of the gospel and the patient, selfless demonstration of Christ’s love in our acts of compassion.

Voting, political advocacy, and active participation in one’s community are all crucial areas in which we can at least partly fulfill our calling to be salt and light in God’s world. But let’s not forget the heartbeat of Christian witness, which is the faithful proclamation and demonstration of the good news.

We understand, in a world of desperate lostness, the twin truths that our loving God is worth living and dying for, and that people are precious because they are made in His image. May we, in our love for others, take inspiration from our forerunners in the faith so that even the nonbelievers around us give glory to God.

Chris Castaldo is lead pastor of New Covenant Church in Naperville and author of the forthcoming book from Crossway, The Upside Down Kingdom.

1 Caesarea had a population of about 45,000. There were only thirty-one cities in the empire whose populations were greater than 30,000. See Rodney Stark, Cities of God: The Real Story of How’s Christianity Became an Urban Movement and Conquered Rome (New York: Harper Collins, 2006), 35-36, 60.

2 Eusebius, The Church History, trans. Paul L. Meier (Grand Rapids: Kregel, 2007), 293. In other editions, see IX.viii.13-15. Eusebius records that the famine was so severe that a single measure of wheat was sold for 2,500 drachmas, one drachma being the daily wage of a skilled worker (292). Eusebius interprets the tragic events as divine punishment upon the city for its zeal in carrying out the government-sponsored persecution of the Christians initiated by Caesar Maximin. Shortly after these events Maximin died, Constantine became emperor, and Christianity was legalized throughout the empire.

5 See Stark, Cities of God, 35-59, for a brief overview of the Christian presence in each of the thirty-one largest cities of the empire.

8 Rodney Stark, The Rise of Christianity: How the Obscure, Marginal Jesus Movement Became the Dominant Religious Force in the Western World in a Few Centuries (San Francisco: Harper Collins, 1997), 214.