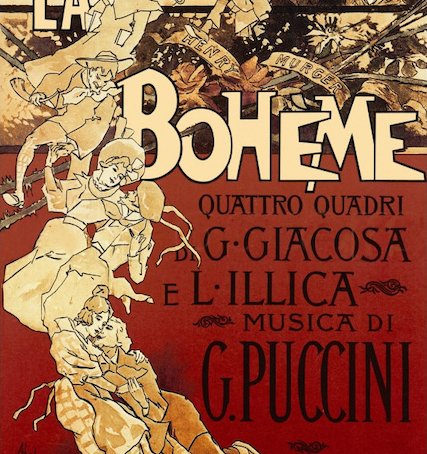 You’ll probably not be surprised to hear that I have a particular passion for Italian art and artists, even though I make no claim to being an expert in such things. But as my pinky ring is my witness, I know what I like! One of my very favorite Italian works is La Bohème, composed by the great Giacomo Puccini between 1893 and 1895 to an Italian libretto by Luigi Illica and Giuseppe Giacosa. This opera is based on the book Scènes de la vie de bohème (1851), by Henri Murger. The fictional story told in the opera is mostly about the relationship between Rodolfo and Mimì, two poor young people living in the Latin Quarter of 1840s Paris.

As I explained in a recent sermon, I was watching a fantastic online presentation of La Bohème when I was struck by a powerful scene in the opera’s first act. Rodolfo (played by the great Italian tenor Andrea Bocelli) and Mimì (played by South African soprano Pretty Yende) have just met, but a breeze from the night air has blown out their candles, and they are fumbling around in the dark, with Mimì near the open window.

When Rodolfo turns, he sees Mimì’s lovely face illuminated—transfigured, really—by the full moon, he instantly falls in love with her, and they sing a duet—O soave fanciulla—”Oh lovely girl.” In that moment, the two lovers inhabit two worlds simultaneously. One is the shabby, depressing reality of Paris’s Latin Quarter. The other is a higher reality—of love, longing, and hope. It is a stunning scene.

As we saw in Ephesians 4:17-24, Christians also face two realities. One is what we are before and without Christ. It is a shabby existence that produces alienation from God, impurity, and all manner of evil. Our passage calls it the “old self,” or the “old man,” likely pointing to Adam in his primal rebellion against the Creator. This, truth be told, is where too many of us live, too often.

The other existence, the “new self” or “new man,” is available to us if we “put off” the old self and “put on” the new. This happens when our minds are renewed by Christ (verse 23). Living the life of a real Christian therefore is not automatic, at least in this world. It requires a daily (sometimes minute by minute) decision to live in light of the higher reality of “Christ in you, the hope of glory” (Col. 1:27). Such an illuminated, transfigured life of looking God in the face and thereby being transformed by glory into glory (2 Cor. 3:18) is available to each of us, no matter our circumstances, praise God.

Another implication for the Christian life can be teased out of this opera—the importance of theological study. Think of the marvelous moment when Bocelli took Yende’s hand, a gesture that corresponded perfectly to the moment in the story when Rodolfo took the hand of Mimi.  Such timing was not an accident but rather illustrated that the operatic star was fully in character, entering the narrative in a way that was possible only through years of study, reflection, and performance. By doing so, he personally understood Rodolfo, which allowed him to become Rodolfo.

In a similar fashion, we can enter the world of the Bible—indeed, we can approach heavenly realities—by not simply reading and studying Scripture, but by routinely enacting it. Like Bocelli, practice will do wonders for our spiritual growth. As 2 Timothy 2:15 reminds us:

Do your best to present yourself to God as one approved, a worker who has no need to be ashamed, rightly handling the word of truth.

So, let’s immerse ourselves in God’s Word and enjoy the illuminating light of the gospel. The late John Stott spoke of living between two worlds. No, we will not completely escape the bonds of this oft-shabby, fallen world, at least until death or Christ’s return. But, starting today, we can live according to our upward calling in Christ Jesus amid every circumstance, exhibiting the light of His beauty to those around us.